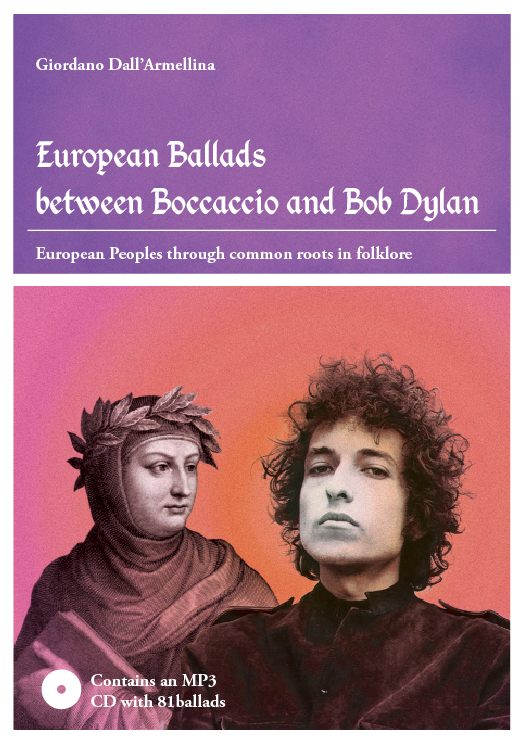 European Ballads between Boccaccio and Bob Dylan was first published in 2014. The book  contains an MP3 cd with 81 ballads in 8 different languages plus local dialects. The countries involved are : Germany, Great Britain, Ireland, Italy, France, Spain, Sweden. More than 70 artists have conributed to the recording of ballads.  Book Time publisher Euro 22. From April 2015 the book can be purchased in E-Book format.

After 700 years since Boccaccio was born this essay intends to contribute and enrich the research about the links between the great Italian novelist and folklore. In particular the essay emphasises the connection between three European ballads that are still sung today and three novellas in the Decameron.

In some of Bob Dylan’s songs we also find roots in ancient ballads. In the famous song of the American singer A Hard Rain’s A-Gonna Fall, that concludes the essay and derives in part from an Italian ballad, the author of the essay suggests a comparison between the allegories in Dante’s Comedy and this song.

Between Boccaccio and Bob Dylan you will read and listen to dozens of ballads sung in 8 different languages. Ballads are translated and analysed in their cultural context.

You will realise that the same stories are sung in distant parts of Europe and even in the USA and Canada demonstrating a common culture that the European Peoples share.

This book is divided into 13 chapters. The different subjects deal with the history of ballads and their evolution from Dante to the present day. Some topics are universal such as sensuality and erotism, unfaithfulness, the return of the hero from war, impossible love, just to mention a few. In the background though, there is the strong influence of Greek, Latin, Provençal, Norse and Celtic cultures.

This is a work with many anecdotes, curiosities and surprises, among which the discovery of some verses of the world famous Italian song Bella Ciao in an ancient Provençal ballad and the textual and musical beauty of the Sephardi ballads.

It is a fascinating and involved trip to understand the roots of European culture and indeed a way to a better comprehension of ourselves.